Visitors to Fort Smith, Montana are often struck with the beauty of our Water Tower, and anyone can see that it bears a striking resemblance to the Space Needle in Seattle. While the resemblance is uncanny (see pic), we wouldn’t trade our Tower for the Space Needle and here’s why: 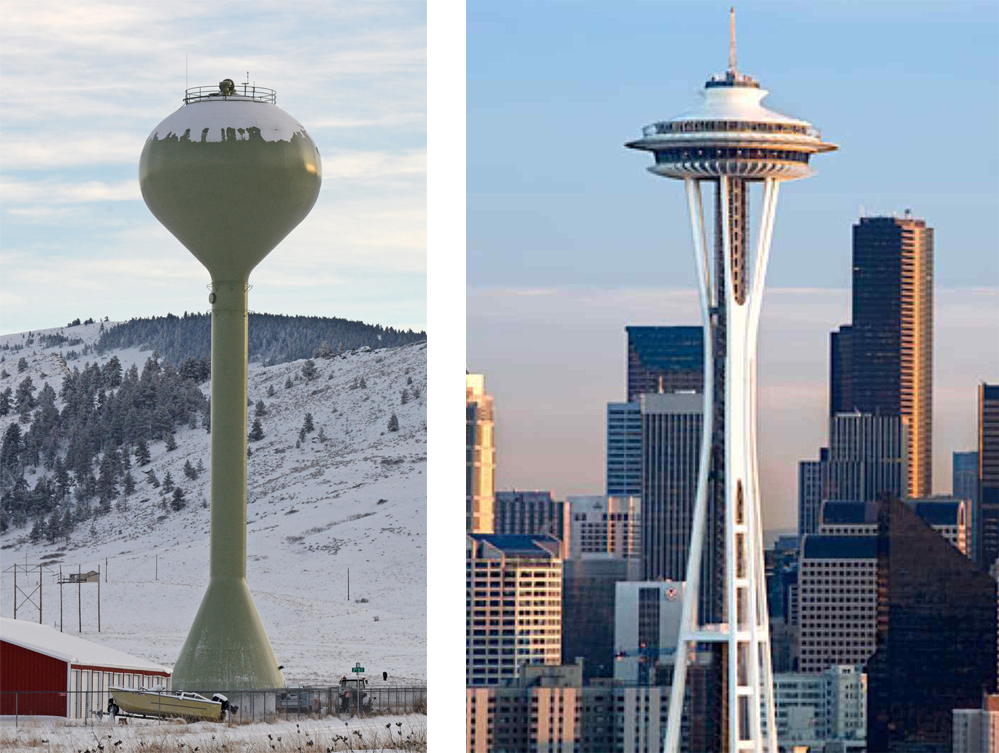 1. The Water Tower completely dominates Fort Smith’s skyline. The Space Needle has to compete with large buildings. Clutter, clutter, clutter!
2. Because of the compact and ingenious layout of Fort Smith streets, almost all residents live in close proximity to the Water Tower and can therefore enjoy its splendor. People in the outer reaches of Seattle can barely see the Space Needle, and it’s foggy half the time.
3. The enlightened builders of the Fort Smith Water Tower painted the structure in a subtle, olive color that would blend in with nature and not offend local wildlife and tree huggers. Not so with the showoffs who built the Space Needle.
4. While it is certainly possible that people have smoked pot and gazed admiringly at the water tower in Fort Smith, they haven’t done so legally. Probably half of all people who currently gaze at the Space Needle are legally stoned.
5. Visitors can reach the top of the Space Needle by elevator. In an effort to promote physical fitness, the Fort Smith Water Tower was designed without elevators.
6. The Space Needle was built by the Pentagram Corporation. I’ve heard that Satanists and Death Metal bands like the pentagram symbol. As far as we know, no Satanists were involved in the construction of the Fort Smith Water Tower.
7. In 2008, the Space Needle received its first professional cleaning since the opening of the 1962 World’s Fair. “FIRST professional cleaning”?! Okay, so the Fort Smith Water Tower hasn’t been professionally cleaned yet, but I bet we’ll have it cleaned before 46 years transpire.
8. Extensive Wickipedia historical research reveals that Edward E. Carlson, chairman of the 1962 World’s Fair in Seattle, was the man who was inspired to erect a tower in Seattle. He was “inspired” by a visit to the Suttgart Tower in Germany. Fort Smith residents got their inspiration from a visit to Billings, Montana in the good old US of A. Absolutely no German or Nazi ideology influenced the Water Tower design.
9. Seattle officials made plans to build a stork’s nest atop the Space Needle, but this was cancelled when it was learned that storks can’t live in Seattle’s climate and would migrate to warmer climates. Water Tower officials have never been concerned with storks, or any other birds for that matter. Insensitive though this may be, it promotes fiscal responsibility.
10. The Space Needle uses an ungodly amount of electrical power. Hydroelectric dams have been constructed all over the Pacific Northwest, and some of this power goes to the Space Needle. These dams have decimated salmon and steelhead runs. The Fort Smith Water Tower has no revolving restaurant, observation deck, or gift shop. We only have to supply power to three piddly-ass lights. Salmon and steelhead numbers are unchanged in our area.