Finding the Outdoor Career that Suits You

For those of you who are looking for a career in the great outdoors, there are many positions available. Many of them are challenging, fun, and rewarding. Others are not. Some require an extensive knowledge of fish or game animals, woodsmanship, navigation, or even survival skills. For others, well, you just have to be willing to do what your boss tells you.

Years ago there was a television show called Mutual of Omaha’s Wild Kingdom. Marlin Perkins was the host and Jim Fowler was the co-host. “Co-host” is a nice title, but in reality Jim was hired to do all the dirty work, such as keeping Marlin alive in the wilderness, and bailing him out of bar fights in rural, redneck-infested towns. Jim was a large man and somewhat of a badass who could handle almost any situation. These qualities came in handy because it was not unusual to hear Marlin say, in the show’s voiceover narration, “Jim is grappling with this lively gator, and he must be careful to avoid being drug into deeper water”; or “Jim has found out it’s not a good idea to surprise a mature bull, elephant seal.” Jim was an educated man, a zoologist by trade, but we all knew why he was on the show.

When I guided in Alaska I had a guiding colleague named Butch. Butch was not a high-IQ individual, but he proved to be of great value to our lodge. He was a young, very large man, who hailed from that bastion of outdoor recreation, Chicago, Illinois. He had played football in college where he anchored the offensive line, or maybe it was the defensive line. He reminded me of swarthier version of Mongo on Blazing Saddles. There was a rumor that Butch had connections to the Chicago underworld, but who knows. Butch was kind of like our Jim Fowler, hired to be the muscle of our lodge operation. Not that Butch had to grapple with wild animals, although it was a distinct possibility for all of us in Alaska. Butch routinely hefted large outboard motors and other heavy objects around the lodge. Butch was not much of a fly fisherman, so he had to prove his worth in other ways.
Our boss, the lodge owner who I’ll call Carl so as not to besmirch the lodge’s current reputation, was a man who used to guide polar bears near Nome. Although he was an excellent pilot, his small plane often strayed off course, and he would have to make hasty landings on the Siberian coast. Out would pile Carl and a heavily-armed Texan, who would promptly shoot a trophy polar bear. Carl contended that the bears were bigger on the other side of the International Date Line. Come to find out, both the Russians—back then they were known as “Soviets”—and the U.S. State Department, became privy to my boss’s tendency to stray off course and Carl was advised to find a new line of work. Actually, they suggested that a new line of work was preferable to an extended tour of the Siberian gulag system, or time in Leavenworth, depending on which government agency got to him first. Carl took their advice and ended up as a fishing lodge owner in the Bristol Bay region.

Back to Butch: I’m not sure where Carl met Butch, probably at a Midwestern sports show, but early in the fishing season Butch was assigned to guide on Sockeye salmon rivers. There’s nothing wrong with Sockeye salmon. The fish are beautiful and they fight hard, at least when they are fresh from the salt. They are also delicious, and usually they were the fish chosen when clients wanted to keep fish and take them home to eat. Because of their abundance, the Sockeye salmon river guide was employed most of the day as a glorified fish butcher. Actually, there wasn’t much glory in slapping mosquitoes and filleting fish, all the while glancing behind you to make sure you yourself weren’t going to be filleted by a large, carnivorous animal. But Butch did his job faithfully, and was later selected for promotion.

Our lodge was located near Lake Illiamna, but Carl wanted to station two boats on a river that emptied into Cook Inlet. Getting the boats to this river was not easy. Arrangements had to be made for the boats to be ferried across the Inlet by a large vessel, whereupon two of our guides who had been flown over to meet them—Butch being one of them—took delivery of the boats. The guides then motored down the Inlet to the mouth of the river. The logistics of all this, plus the danger of piloting a small craft on the open ocean, demanded a firm commitment by our lodge to establish a camp on this wilderness river. But the weather cooperated and a successful voyage was made, a camp established, and Butch and Lenny were stationed on this fishery. Lodge clients were now flown to the new destination, and Carl enjoyed immensely the glowing reports he received about the river’s trophy silver salmon. It was a true wilderness fishing camp, utilized exclusively by Carl’s clients, and he viewed this river as his private fishing preserve. Life was good.

But alas, the day came when a rival lodge, inspired by reports of large, chrome-bright silver salmon, assigned their own pair of intrepid guides the task of bringing jet sleds to the same river. One of these adventurous young men, Ted, was a former employee of Carl’s who had fallen victim to Carl’s mercurial temperament and had been fired just a year earlier for violating the lodge’s curfew. Ted quickly inquired at a rival lodge about employment and was hired immediately. The rival lodge owner was aware of Carl’s volatile personality and gave Ted the benefit of the doubt for being unjustly treated. Besides, Ted might be able to provide some valuable intel regarding fishing techniques and secret fishing holes. One of the secret fishing holes Ted was able to provide were the plans for Carl’s establishment of a river camp on the Cook Inlet silver salmon stream. Hence it was that Ted and Rick motored their way along the seacoast until they too found the outlet of Carl’s fabled salmon stream. Ted was proud to be part of any mission that might compromise Carl’s piscatorial sovereignty, and it was with a certain relish that he cruised up river with the wind in his face.

Once they discovered where Carl’s camp was located, Ted and Rick decided to establish their camp closer to the mouth of the river. The nearby beach/landing strip wasn’t as nice as the one chosen by Carl’s boys, but Ted liked the idea of intercepting the fish before Carl’s guys had a shot at them.

And so it was that the two rival lodges worked the same remote, wilderness river. Things could have worked out just fine, but alas, Carl soon received the bad news from Butch that they were no longer alone, and Butch was given orders, shadowy orders … sinister orders. It began simply enough. Carl now made it a point to fish downstream from his camp, downstream as in right next to Ted’s camp, or wherever Ted was fishing. During their encounters, Butch gave Ted the international signal of disapproval, recognized by a middle finger held aloft. Ted refrained from responding, mainly because Butch was as large as some brown bears, only more aggressive. Each guide’s clients looked at one another, trying to ascertain the reason for such hostile behavior.

But it didn’t end there. In fact, here’s where it ended: at the end of August in the middle of the night, Butch came floating down river. His jet sled had oarlocks and oars as backup, and Butch now utilized these for stealth purposes. At 2:00 AM, in the semi-dusk of the Alaska summer night, Butch beached his boat on the riverbank about 400 yards upstream of Ted and Rick’s camp. He then walked downstream until he came upon Ted and Rick’s boats where they were anchored in shallow water in a small cove. Butch pulled the boat plugs, and as the water slowly filled the crafts, he waded out and gave each one a powerful shove toward the current and deeper water.

As for the events in Ted and Rick’s camp later that morning, I can only speculate. The boats were gone. The water hadn’t come up, so they knew rising water or improper mooring hadn’t victimized them. They must have felt like two cowboys, who after a successful night of drinking and card playing, walk out of the saloon to discover their horses are no longer tied to the hitching post. They quickly figured out they had been the victims of foul play. Their misery soared to new heights when the lodge airplane full of hopeful clients landed on the beach downstream.

I’m merely reporting events that were related to me shortly before the lodge closed for the season. We were sitting around a roaring campfire on the shore of Lake Illiamna, and there was beer involved. This event took place over 30 years ago, so if any Alaskan guides have recently had their boats sunk, don’t call me. I certainly do not condone Butch’s actions. I don’t even know where Butch is today, whether the trajectory of his life later resulted in incarceration or whether he is still enjoying free society. Both lodges survive to this day, although under different ownership. Butch is probably not the right person to use as an example, but one of the lessons we can learn from this tale is that almost everybody can find something they are good at, and in the process make their boss happy. 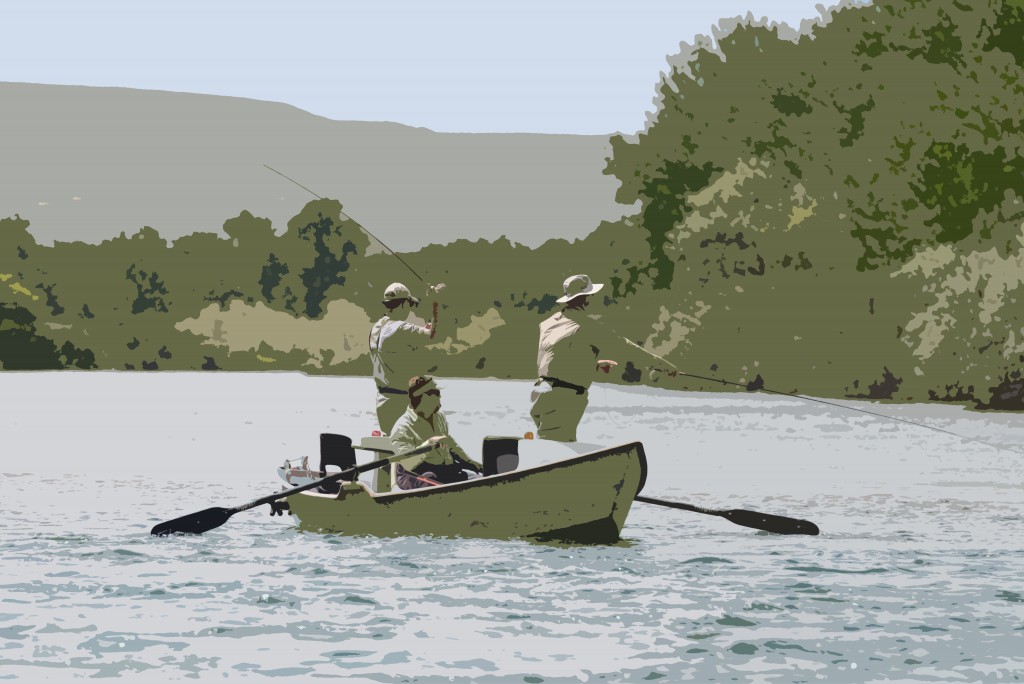