Interview With a Brown Trout 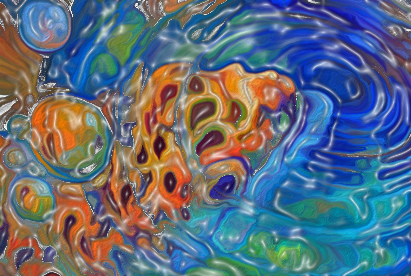 Sharper Image recently came out with their new Bluetooth Sonar Trout Translator, an ingenious device that consists of an earpiece and microphone worn by the human, and a probe that is dropped into the water to communicate with trout. Come to find out, trout are highly communicative little critters, and I had the opportunity to interview a 19” Bighorn River brown trout just the other day. Mr. Brown (he was reluctant to provide his real name) resides at the lower end of the Pipeline Run.

HH: Forgive me for being nervous. This is the first time I’ve been able to speak openly to a fish, at least one who could talk back. I hope I don’t say something offensive.

Mr. Brown: No need to be nervous. But if you were worried about offending us, why do you keep floating those double-nymph rigs through our homes? I was foul hooked last June.

HH: Uh yeah, accidents do happen. By the way, regarding double-nymph rigs, do you find them more tantalizing than singles?

Mr. Brown: Yeah, I have to admit that the bigger fly often catches my attention. And if it’s a bead head, it will usually be right on the bottom in front of my face. Hard to ignore, especially when the water’s cold.

HH: So what makes your people … er, fish, tick? I mean we’re all about love, liberty, and the pursuit of happiness up here.

Mr. Brown: We don’t have time for that stuff down here. Mortality rate is 40% on three-year and older fish during the winter. My uncle Bernard cashed it in last winter. He’s the one who taught me how to concentrate on emergers rather than duns. I miss the hook-jawed curmudgeon. His advice added years, or maybe, weeks to my life. I’m an efficient feeder now. But it’s all about survival down here. Uncle Bernard was cool, but my Uncle Mack tried to eat me when I was a fingerling. He was taken out by a WWD, and good riddance I say.

Mr. Brown: Yeah, a Weapon of Winged Destruction. You know those shadowy things with the big claws that swoop down and grab you by the back. Not sure what happens after that but I don’t think it’s good—nobody’s returned to tell.

HH: I guess you’re referring to an osprey.

HH: Ah, white pelicans. Yes, not much fun from your perspective. Herons either. I guess it is all about survival in your world. But surely there are things that make you happy?

Mr. Brown: As close as I come to happiness is a fat, slow minnow. Also, scuds and sowbugs are full of protein, like little steaks floating downriver; plus I don’t have to get to close to the surface where bad things tend to happen. And there is spawning, of course.

HH: Yeah, spawning is a big deal in our world as well. Say, are you guys really concerned with tippet size?

Mr. Brown: Yes, size matters but not in the way you might think. It’s all about a natural drift, and the smaller the tippet, the more naturally it drifts. We stare at drifting food all day and we can tell if something is acting a little funky.

HH: Interesting. Okay, here’s a question: what’s the biggest tip-off that an artificial fly is phony?

Mr. Brown: It’s not any one thing, but I have noticed that you humans love complicated flies. You can’t help yourself. You have to put on beads, rubber legs, pearlescent mylar, epoxy, antron, zelon—there seems to be no end to what you include in a fly pattern. And oh yeah, there’s Cruel Canard.

Mr. Brown: Whatever, the duck butt stuff. We see plenty of duck butts on the river without you making every other fly out of it. But consider this: it’s all about size and silhouette. If you can approximate the size and silhouette of what we eat, we’re more than happy to take your fly for a ride. We don’t have the time or the IQ to analyze much beyond this.

HH: So we’re wasting our time with complicated patterns?

Mr. Brown: I suppose you catch the fisherman with them. But it’s kind of like that press conference years ago when the Chicago Bears were in the Super Bowl. Rex Grossman was the Bears’ quarterback. Everybody knew that he truly sucked, yet Coach Lovie Smith told everyone that they had made it to the Super Bowl because of Grossman. That’s when a smart aleck sports reporter asked, “Don’t you guys think you made it to the Super Bowl in spite of Rex Grossman?”
That reporter hit the nail on the head. The point I’m making is that guys tie all this fancy stuff and you catch us now and then, but you generally catch us in spite of all your technology. Keep it simple, stupid!

Mr. Brown: Not exactly. But when we rise near the surface we hear you guys talk. You never shut up, by the way, especially about sports. And while I’m complaining, debarb your hooks for God’s sake. It only takes a second.

HH: Before I lose control of this interview, do you browns get along with the rainbows? And why are the rainbows generally in better shape, at least here on the Bighorn?

Mr. Brown: Rainbows Schmainbows. They’re the blonds of the fish world. That’s why you’re always catching rainbows minus their mandibles. They never learn. I did date a pretty bow when I was younger, but it was going nowhere—we spawn at different times. As for their corpulent appearance, rainbows tend to root around in the moss for crustaceans more than we do; hence they eat more scuds and sowbugs, the real high-protein stuff.

Mr. Brown: They have to eat a lot of fiber—I guess you call it algae—to get to the crustaceans. You won’t catch us browns with algae hanging out our backsides. We have more pride than that. We prefer drifting food or minnows. Being from Europe, we’re a bit more cultured than these barbaric Americans. Are you aware that rainbows are now classified in the same genus as Pacific salmon? I’m surprised they don’t die after they spawn.

HH: I guess I had heard about the genus switch. So what’s your favorite hatch?

Mr. Brown: Hmm, Baetis are nice because they happen in the spring, and we really need the calories after a long winter. But Baetis nymphs are swimmers and I don’t appreciate that. Quick little buggers. I don’t mind chasing the occasional nymph or pupa, but I prefer to do it when the water temperature is above 42 degrees.
I suppose the PMDs are a personal favorite, fairly sizeable by Bighorn standards. Haven’t seen much of them the last few years, but they’ll be back. I’ve talked to cousins on the Yellowstone. They keep bragging that their salmon flies are as big as 200 of our PMDs. Tempted to migrate, but overall we have it pretty good in this tailwater. Don’t hear my cousins bragging when they’re dodging ice flows in March.

HH: Say, you mentioned that you love minnows and we fish a lot of streamers on the Bighorn. Can you give me some tips?

Mr. Brown: Kind of a conflict of interest, but here goes: quit being so one-dimensional. You guys love to “pound the bank” and I know you hook your share of us doing it, but there are a lot of us who live out in the middle of the river, or in the deeper holes. Fish a 24’ sink tip or a full-sinking line and let it sink for God’s sake! If you’re not snagging bottom once in awhile, you’re not doing it right. And try angling your casts upstream and retrieving them at a downstream angle. And don’t tell everyone about this, but we love a jigged fly. Pop the tip of the rod up, then pause and let the fly drop. Makes the retrieve erratic. Drives us crazy.

HH: How about pattern selection?

Mr. Brown: Well, back to that size and silhouette thing. If you can get a handle on what we actually eat—long-nosed dace, little trout, carp or sucker minnows, leeches—you’re ahead of the game. Fish something “natural” looking. I know some of my kin will eat almost anything at times; come to think of it, certain humans will as well—Pork Rinds, Pickled Pig’s Feet, Deep-fried Twinkies, are you kidding me! But the fish who survive long term, my big-fish relatives, get that way by pursuing prey familiar to them. These prey are imprinted on their little brains, so take advantage of it. By the way, are you impressed with my intelligence?

HH: I am impressed, especially with the football knowledge.

Mr. Brown: Hey, I’d better get in on this midge emergence, but can I ask a favor before I go?

Mr. Brown: I hear they’ve removed a couple of dams on the West Coast, and the salmon and steelhead are returning. I’m happy for all of them, but I’d prefer you don’t screw around too much with Yellowtail Dam. It would be a trout holocaust.

HH: I’m with you on that. Thanks for your time, and happy spawning this fall.