“Undefeated Canada Wins Curling Gold!” … “Latvia Takes Bronze in Luge Team Relay.” Headlines like this have generated a lot of excitement recently, and I’m sure most of my readers have been consumed by the winter Olympics for the past two weeks. But it’s time to move on and think about fly fishing and the new and exciting products that will make you successful for the upcoming season. Here are a few of the Trout Shop’s favorites: 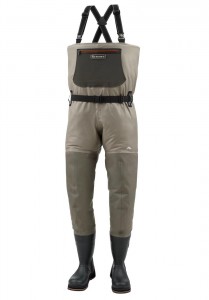 For a couple of years now people have been whining about the absence of high-quality bootfoot waders and rightly so. Simms used to make them with a well-insulated Muck Boot and all was well with the world. Then we received word that “there is a problem with the Muck Boots”—I suspect the problem was that they cost too much—and all of a sudden Simms is out of the bootfoot business. People around the world wiggled their toes in consternation, and because they were trying to restore circulation, because nothing keeps your feet warm like bootfoot waders. Well, now you can rejoice. Simms is selling bootfoot waders again, not with the venerable Muck Boot, but with a new insulated boot that looks to be of high quality. They’re not quite as warm as the old Muck Boots, but they get the job done. The new boots run just a smidgeon smaller than the old Muck Boots, so keep that in mind if you order a pair.
The wader upper has all the features of the G3 Guide Stocking Foot wader with 3-layer Pro Shell Technology in the upper and 5-layer Pro Shell Technology in the lower. GORE-TEX Pro Shell is purportedly 25% more breathable. As to what it is 25% more breathable than, I’m not sure—I assume the previous GORE-TEX material used in the G3.
This is a great product for those who fish in frigid water temperatures, and who don’t like to bend over to lace up their boots.

2. Sage 2200 Fly Reel
For many years, Sage has made a good living by making some of the best fly rods in the world. They’ve sold reels for most of these years, some of them good, some of them not so good. But this year’s crop of Sage fly reels is exceptional, especially the 2200 series. The 2200 series reels are die cast, not machined, but I wouldn’t worry about this too much. They are still light; they have sealed disc drags, and they’re good looking too. Well, beauty is in the eye of the beholder, but I like the looks of them. But the most beautiful thing about them is that the 5/6 model retails for $139.00. Great value. Might make it difficult to sell the more expensive reels.

3. Smith ChromaPop Glasses
Trying to explain the characteristics of the latest sunglass technology has always left me a bit … blurry, so I’ll try to stumble my way through this. When you look at the advertisements for these new Smith glasses, you might think the folks in Sun Valley are trying to market a psychedelic drug trip, sans drugs. At least that’s the impression I got after seeing all the surreal colors depicted. But the new ChromaPop lenses are all about, and I quote, “Blocking specific color wave intersections as they pass through the lens.” By doing this “ChromaPop is able to eliminate color confusion, so your brain is recognizing true color faster. ChromaPop optimizes color and increases clarity, enabling you to see the outside world with an unparalleled level of vibrance.”
Got it. The glasses eliminate brain color confusion and make the world a brighter, more beautiful place. I’m hoping Smith addresses other forms of brain confusion in the future. I’ve been relying on caffeine.
Besides the increased color clarity, ChromaPop polarized lenses are not made with the old “sandwich” construction where a polarizing filter is glued in between layers of glass or polycarbonate. With ChromaPop, the polarizing filter is an integral part of the lens itself, and won’t crack or delaminate. The lens material is lightweight, scratch resistant, and includes anti-reflection and hydroleophobic coatings (repels moister and grease).
Will ChromaPop glasses help me see fish? The rep gave me a pair to try out last fall, and I like them a lot. Of course, I tend to like anything that is free quite a bit, but really, these are great.

I’ll admit that I’m somewhat predisposed to give this book a positive review, since I wrote the chapter on the Bighorn River. Here’s what I would say about the Bighorn River chapter in particular: “This chapter contains passages as powerful and as beautiful as anything written, not merely by contemporary American writers but by any American writer.” Okay, I stole that quote off of the dust jacket of Tom Wolfe’s “A Man in Full.”
Let’s face it: Regarding trout streams, tailwaters consistently provide the highest quality and most consistent fishing. I could go on about the various advantages, but I’d be preaching to the choir. As the title indicates, this book provides information on the best of the best. It was written by outfitters and guides who are considered experts on their respective rivers. My old boss, Craig Matthews, wrote the chapter on the Madison River, and good friend and steelhead guide, John Hazel, wrote the section on the Deschutes River. Terry and Wendy Gunn wrote about Lee’s Ferry. Lots of good information throughout, and the angler who wants to take a tour of our nation’s best rivers should find this book very helpful.