Most anglers are aware that the Bighorn River will see high water this spring. Flows are already up. Of course, every river in Montana will be high this spring. The Bighorn is one of the few that will remain fishable and productive.

Some people panic when they hear about high water. Granted, I am a fly shop owner and as such, I’m highly trained in the art of putting a positive spin on almost any situation. “A chemical spill on the river could be beneficial in reducing excessive aquatic vegetation and fish numbers. Reducing the overall fish population would help bring the average size up.” See what I mean? But in all seriousness, high water flows do benefit the Bighorn River. We must remember that the Bighorn River trout fishery was created by Yellowtail Dam. Most of the silt that formerly flowed down the river now settles in Bighorn Lake. But not all of it. Silt still makes its way into the river below the dam through irrigation returns and various feeder streams, plus wind blows soil into the river from nearby wheat fields. The cumulative effect of all this silt tends to choke out aquatic insects and crustaceans, and it adversely affects spawning habitat. Back in the early 2000’s, we experienced a severe drought that over time brought a noticeable reduction in the quality and intensity of our insect hatches, plus led to a significant decrease in fish numbers. Higher water flows remove silt accumulations, and insect hatches bounce back very quickly.

Okay, so high water is good in the overall scheme of things, but what about the fishing? We all know you generally have to use more weight to get your nymphs to the bottom. I use the word “generally” because that statement needs to be qualified. High water, especially in the spring when water temperatures are cold, pushes the fish toward the bank and out of the heavy current. So it can be a mistake trying to fish out in the heavy current when most of the fish are holding near the bank. But yes, fishing more lead is par for the course in high water years. Just be sure to read the river afresh—the trout don’t want to work hard, and many anglers spook fish that are holding “in tight.”

During high water you lose holes and gain holes. Your secret spot from last year might be completely blown out by swift current, while a back eddy or current edge fifty yards downstream now holds many fish. Like I said, you have to read the river like you’ve never fished it before. I’d say there is a net loss (no pun intended) of good wade fishing spots during high water, but some of the good ones are really good. High water tends to create some “super holes” with huge numbers of fish stacked up in certain areas. Competition can be fierce acquiring these spots, especially during the busy season, but if you get into one, you can rack up the numbers. Side channels become more of a factor too. Fish move quickly into these areas, so don’t overlook channels you haven’t fished in years.

When the water is high, people who use professional guides have an even greater advantage over non-guided parties. This is because guides are usually out there day after day and are able to figure out the more subtle seams and edges that hold fish. This daily “familiarity advantage” is even greater when the water is rising every few days and the holding water is changing. If you’re an angler who hasn’t been here for a few months, your first glance at the river can be intimidating, and it takes time to get your bearings as to where to find fish. It’s not uncommon for guided groups to have huge, fish-number days, while the private angler struggles. This disparity lessens the longer the private angler fishes the river.

I often go to a more visible rig when the water is high. I stick with my basic midge pupa or Baetis nymph on the point (end fly), but fish a San Juan Worm or Hot Bead Sowbug as my upper fly. The bigger fly captures the fish’s attention, and he moves over for a look. Usually, he’ll eat the smaller bug, with the upper fly acting as an attractor. As the water temp rises later in the spring, I notice a shift in preference toward the bigger flies. San Juan Worms seem to work especially well as we approach mid-June and the peak of the runoff. 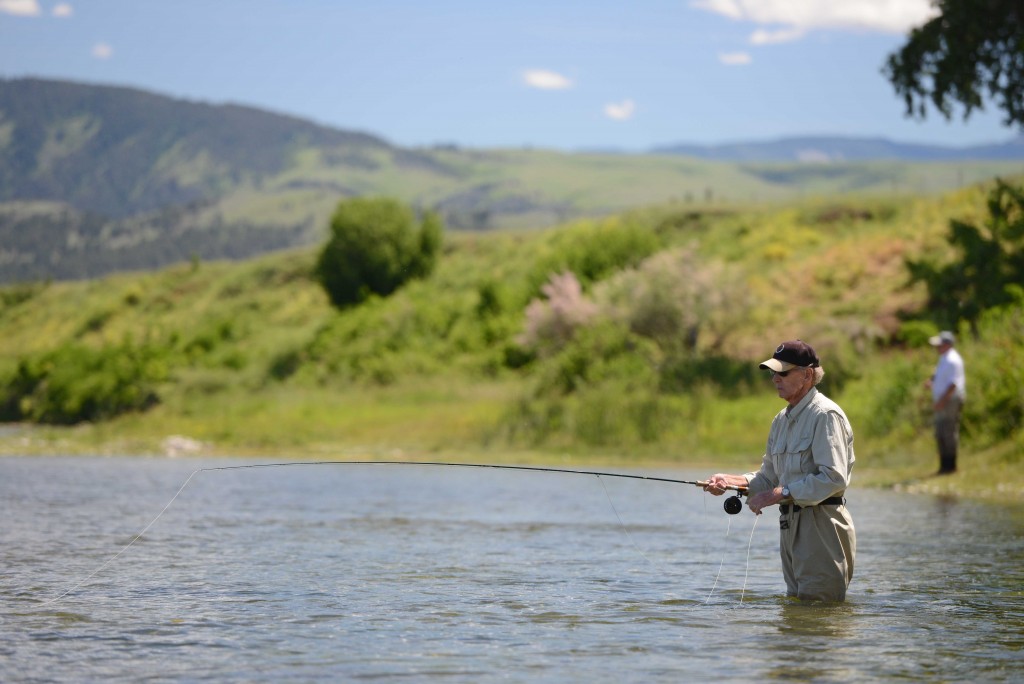 Dry fly fishing is often sporadic during higher flows. Obviously, the opportunity to wade calf-deep in gentle currents while casting to pods of sipping trout seldom avails itself. Rising fish are restricted to banks and back eddies, and small pocket areas at that. As a general rule, if the insects are there, the wind is down, and the current and depth of the water are right, there is dry fly fishing available. I’ve found the dry/dropper technique to be quite effective during this time. Higher flows tend to churn up a variety of pupa and nymphs along current rips and eddy lines, and these crippled insects are often trapped just below the surface film. You’ll often see fish swirling and bulging in back-water areas as they take advantage of the situation. These fish may be reluctant to eat a traditional dry fly, but can be readily taken on a nymph or emerger just below the surface. In the spring, I often have a boat rod rigged with a #16 Parachute Adams and a #20 Tung Teaser dropper. The Tung Teaser imitates a black midge pupa, and even a Baetis nymph, quite well. It’s a fun rig to fish when you want to take a break from lead lobbing. Now and then a fish will take the dry fly, but usually they eat the sunken pattern.

In a perfect world there would be no temperature extremes, gale-force winds, droughts or high water. A wild trout fishery is far from perfect. I’ve never seen a river as productive as the Bighorn, no matter the conditions, but that doesn’t mean you won’t have to adjust your techniques and change your mindset.