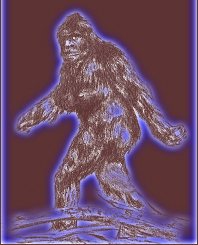 Not many people have interviewed Sasquatches, but I highly recommend it if you get the chance. Come to find out they’re very intelligent, speak perfect English, at least here in the States, come out mostly at night, and even bury their dead. I guess that explains why nobody ever finds a carcass. This one came from a family in Idaho, but decided to strike out on his own after a disagreement with his father. His father wanted him to marry a second cousin from British Columbia. “She was uglier than a mangy Yeti from the Kumbu,” the Squatch told me.
I’m not sure what constitutes an attractive female Sasquatch, don’t even want to know, but I guess this validates the existence of Yetis in Asia. I changed the subject.
“So, uh, what’s your name?” I asked, wondering if this was a legitimate question.
He stared at me as he grabbed a Bic lighter and fired up another Pall Mall. “Clarence,” he said. I rubbed my chin in an attempt to suppress a smile.
“This is bad,” I thought to myself. If I laugh this Squatch might stride over here and break my neck. “But Clarence?” That’s got to be the all-time worst Squatch name.
Clarence was watching me intently. “Go ahead and laugh,” he said. “I’ve heard it before. My father has a sick sense of humor.”

Clarence had heard about the fishing on the Bighorn River from family members who lived in the Pryor Mountains. His Pryor Mountain Squatch brethren made trips over here now and then for food. The news spread quickly—the river was full of fish. Clarence had walked, and sometimes jogged, over here from Idaho. It’s no big deal for Squatches to cover 50 miles in a night. Apparently these primates have been fishing from time immemorial, but only recently have they adopted fly fishing. It’s now extremely popular among the Sasquatch upper class. It injects a little fun into the mundane job of acquiring food. They gather gear and tackle that scatter-brained anglers leave behind, and sometimes they’ll lift something from an unsuspecting camper. There are even a few outdoorsmen and pawn shop owners who are “in the know” about the Squatch community and help the hairy critters acquire all sorts of stuff, cigarettes for example.

I glanced at my watch and realized I was going to have to cut the interview short. There were still so many unanswered questions. How had they remained hidden from humanity all these years? Do they have written history? And were they ever planning on revealing themselves to the human race at large? But I guess these answers would have to wait.
“Clarence, it will probably take three to four weeks to get this rod back from Sage. You want me to walk it up here when it comes in?”
“That would be great,” he said. “Come visit and I’ll feed you some prairie dog stew. I probably don’t have to tell you that the location of my hideout is our little secret.”
“Of course.” What else was I going to say? I’d have to figure out how to decline that meal later on. Prairie dog stew. Yikes! I got up from the uncomfortable stump chair.
“Anything else I can do for you?” I asked.
“Maybe we can float the river together one of these nights?
“Nights?” Oh, of course.
“Great.” Clarence stood up, handed me my vest, then shook my hand, crushing my knuckles with a loud popping sound.”
“See you soon,” I croaked, trying to sound casual despite the pain.
“Later,” he said.

I hiked back to the river rubbing my hand, wondering if any bones were broken. What an experience! Then I remembered my fly rod, the one I had laid down when I went in pursuit of Clarence. It was right over there.