To Spey or not to Spey 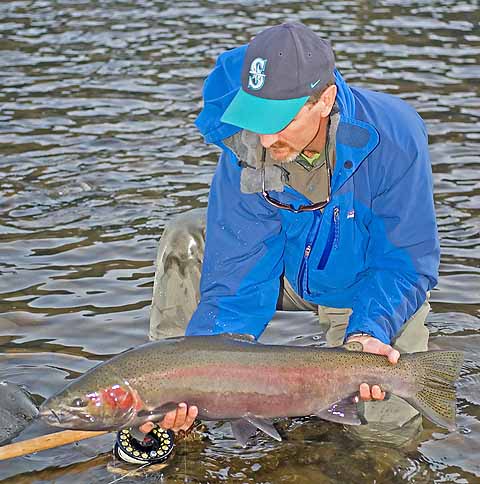 Spey casting utilizes variations of what we might call a dynamic roll cast. There is an array of Spey casts, but in every one of them the angler must form a V-loop (or D-loop) which loads the rod for the forward cast. I recommend RIO’s Modern Spey Casting DVD for anyone looking to improve their Spey casting. While there are a number of instructional videos out there, this is the best one I’ve seen.

Spey casting has several inherent advantages over conventional fly casting: first, the absence of a traditional backcast enables one to effectively fish areas where trees and brush are close behind the angler. Spey casting is also very efficient: you are able to set up and make a new cast after the end of each drift without false casting, which translates to more time with your fly in the water. The long length of the Spey rod allows the angler to throw a lot of line without too much effort, plus it’s easier to mend and control your line. Finally, because both arms are involved, I’ve found Spey casting to be less stressful on the body than fishing with a large, single-handed rod all day, especially if you’re trying to cover a lot of water.

Here on the Bighorn River, fishing streamers with a two-handed rod can be very effective. I prefer a rod around 12’ 6” inches in length and designed to throw a 400 to 450 grain line. There are several rods in this category that I heartily recommend: the 12’ 6” 6/7 wt. Winston BIIx, the 6126-4 Sage Z-Axis, and the Burkheimer 7127-4. These rods are also effective summer steelhead rods. While some Bighorn anglers might prefer a shorter, lighter rod, I believe the river’s size lends itself to using a rod that can throw a lot of line in order to cover the water. I use Skagit, Skagit Compact, or Scandi Shooting Head lines on these rods and find them ideal for swinging streamer flies on a light, sink-tip. You can also fish a floating line with a hopper-dropper setup, and this is very effective in the summer months. The Scientific Angler Sharkskin Shooting line in the .035 size is my personal favorite, but you should wear a Lycra stripping guard or gloves that protect your stripping fingers from line burns. The Sharkskin shooting line simply handles better than the other shooting lines I’ve used—less tangles and it shoots like crazy. That being said, there are other shooting lines that also work well.

All of the Spey casts can be performed on single-handed rods as well, and there are a number of situations where your ability to utilize one of these casts will make you a more effective angler. There are also “Switch Rods,” rods that can be cast either single or double handed. I won’t take the time to discuss these rods now, but if you do your research you will find that there are compelling reasons not to ignore the Spey casting phenomenon. Hopefully, I’ve helped you answer the question, “To Spey or not to Spey.”