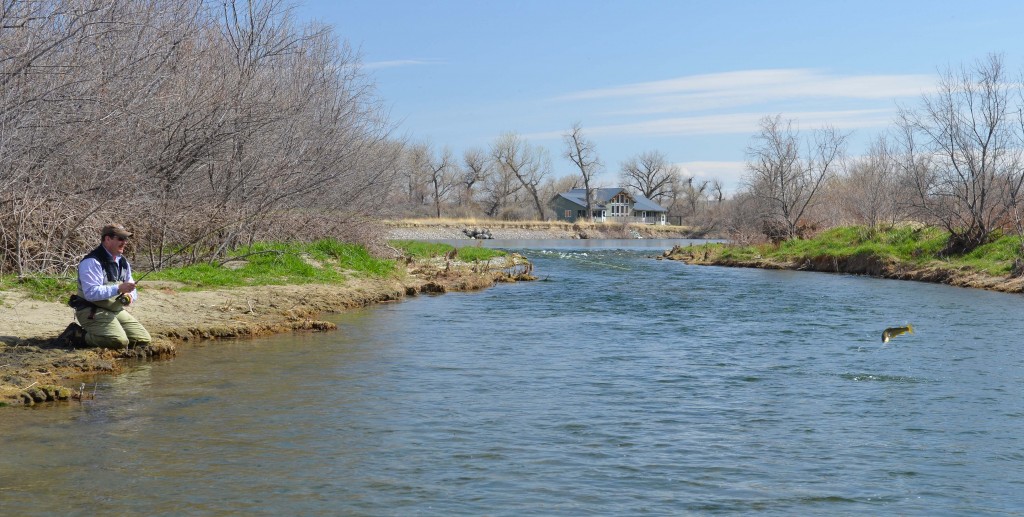 While many western rivers are high and off-color due to spring runoff, Bighorn River anglers can enjoy outstanding spring fishing. Our tail-water river is almost always clear and fishable. Throughout April, May and June our trout are greedily feeding on midges and Baetis mayflies. Sowbugs are also a standby. The fly selection pictured below constitutes a basic spring fly selection.

Left column (vertical):
1. Zebra Midge: Members of the Goth subculture prefer to fish this dark, mysterious pattern. Very effective when the fish are eating black or brown midge pupa.
2. Tung Teaser: The above holds true for the Tung Teaser, but the addition of the tungsten bead gets the fly down quickly.
3. Green Weenie: Lovers of nature and people with cheery dispositions enjoy fishing this olive midge pupa. A top producer when stomach samples reveal an abundance of cream and olive pupa.
4. Root Beer Midge: Recommended for anglers who love the movie American Graffiti and the taste of drive-in root beer in frosty mugs, the Root Beer Midge is a hot pattern for trout feeding on brown midge pupa.

Middle column:
1. Pinky: The Pinky is a soft-hackled pattern with a light-hearted nature and optimistic view of life. Fish eat this fly for a sowbug, scud, and other organisms we’re yet to identify. Regardless, it works very well, especially when water flows rise in June. Don’t let the soft hackle, emerger appearance fool you—fish this fly on the bottom.
2. Ray Charles Sowbug: The late Ray Charles tied this fly back in 1960 after his first performance of the Grammy award winning song, Georgia on My Mind. Charles didn’t fish the fly until years later while on a fishing trip to the Bighorn River, and suspicions of the fly’s effectiveness were confirmed.
Actually, none of the above is true but it’s not a bad story anyway. We’re not sure who invented the Ray Charles, but this ostrich herl pattern is tough to beat as a sowbug imitation.
3. Micro May Baetis (aka Killer Mayfly Nymph): This delicate little pattern is light on his feet and full of emotional expression, kind of like a gay figure skater. This is a fantastic Baetis nymph imitation.
4. Flashback Quill Nymph: Another slightly built Baetis nymph pattern that doubles as a midge pattern. Don’t be without it.

Column 3:
1. CDC Sparkle Dun: All you need when the fish are really on Baetis duns. We even cheat and use it for midges because the up wing is very visible.
2. Smoke Jumper: This suspended midge pattern suffers from low self-esteem and enjoys hanging out with real emerging midges. Actually, the key to the fly’s effectiveness is the tailless body which hangs below the surface film while the CDC wing remains visible on the surface. This simulates a real emerging midge. This fly is similar to the Mole fly pattern created by Charlie Craven.
3. Black-Posted Parachute Adams: Generally, you’ll see a dark post better than a light post, which is the reason for this Adams variation. Works great for midges and Baetis. I think this pattern was invented by John Adams, our nation’s second president, but other reports indicate it was actually created by Butch Adams, President Adam’s ne’er do well brother, the White House custodian.
4. Student: Frank Johnson, longtime BTS guide and fly tying instructor, invented this fly after a couple of cocktails one December evening. He was hoping to invent something really easy to tie in order to make lots of money as a commercial tier. He really didn’t care if the fly actually worked, but lo and behold, the fly proved extremely effective on selective trout. This is the go-to bug when the fish are snotty. Great Baetis emerger or still-born pattern, and works well as a midge too.