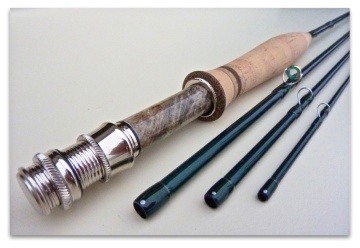 Washougal, Washington is a small city on the north bank of the Columbia River not far from Portland, Oregon. This little burg may very well be the new epicenter of fly rod design and craftsmanship, because it is here, at 2001 Main Street, that Kerry Burkheimer builds some of the finest fly rods in the world. The C.F. Burkheimer company manufactures over 80 different fly rod models (not counting color choices), from rods suitable for the most delicate spring creek trout, to those powerful enough to tame giant tarpon. Probably his greatest following is in the burgeoning two-handed (aka “Spey”) rod market. In this niche, some would say C.F. Burkheimer is not so much a fly rod company as it is a cult group, with an increasing number of steelhead junkies who choose to fish nothing but Burkys.

Growing up in Idaho, Kerry Burkheimer fished from a young age, and at 15 he began building rods from rod-building kits he purchased at the local sporting goods store. He quickly discovered that he had a knack for it, and selling the finished rods augmented the family income and also supported his extensive fishing habit. Years later, Loomis Composites (now G. Loomis) hired him to do marketing research and promotion. It was during this time that a fortuitous meeting in West Yellowstone with Lefty Kreh and legendary rod designer, Russ Peak (1912 – 2001), kindled a fire in the young Burkheimer for rod design and development. As a result of the meeting, Kerry developed an especially close relationship with Peak, who at the time was considered the dean of fly rod designers. While not widely known, a number of preeminent rod designers of the 1970’s and 80s used to seek out Peak’s opinion on rod tapers and design theory. Peak became somewhat of a mentor for Burkheimer, and Peak’s legacy lives on in the rod-design philosophy of the C.F. Burkheimer company. Kerry later became the chief fly rod designer for Loomis, and worked with that company several years before striking out on his own. He recently expanded his Washougal facility, and is poised to become a significant player in the fly fishing industry.

Burkheimer rods are striking in appearance and a notch above other high-end rods in craftsmanship. You’ll also notice the rod blank tends to be slightly smaller in diameter than comparable products of the same line weight. The composite cork, exotic burl wood, nickel reel seats, and the superlative finish of the blanks give them a classy and distinctive look. But ultimately it comes down to how a rod performs on the water. If you need to throw long, or double haul into the wind, Burkheimers have the backbone to get the job done. I’d say Kerry’s rods lean toward the “fast” side of the rod-action spectrum, yet they retain a quality of “fishability” that makes them very pleasant to fish. Any company can make a “parking lot rod” that will throw a ton of line, but will it fish? Personally, I’m a big fan of the Deep Action Load (DAL) series, especially for Bighorn River trout. As its name indicates, this rod loads deeper into the blank. I wouldn’t describe the rod as slow; “smooth” seems to be the operative word. The DAL rods strike the perfect balance for the ideal western trout rod. They load at short distances, throw beautiful loops short or long, and mend line easily.

Back to the Burkheimer Spey cult … err, I mean Spey rod clientel. In the early 80s, Kerry Burkheimer and John Hazel were among a number of guides who worked for Randall & Lance Kaufmann. Kaufmann’s Streamborn had a satellite operation in Maupin, Oregon and it was on the Deschutes River that Kerry and John became intrigued by the potential of two-handed rods. They quickly figured out that two-handed rods and Spey casting techniques were very efficient in covering the big water of the Deschutes and other rivers of the Pacific Northwest. Along with other Spey pioneers of the day like Mike Maxwell, John Farar, Jim Green, and Al Buhr, just to name a few, the use of two-handed rods gradually gained acceptance, and today they are a common sight on almost all steelhead rivers. The quality of rods and lines has vastly improved from the early days.

The first two-handed prototype Kerry built was a 15’, 10 weight. This was followed by a 13’ 3”, 8 weight. Working and guiding on the river provided the ideal R & D situation, and with plenty of feedback from Hazel and other spey gurus, over time the Burkheimer action was “dialed in.” The sheer number of spey casters who use Burkheimers today, including some of the best casters in the world, testifies to the fact that Kerry has indeed learned a few things over the years.

Kerry describes his actions as “responsive” and “progressive.” Without delving into the arcane world of rod tapers and actions, always a confusing and somewhat subjective subject, one thing I’ve noticed about Burkheimer two-handers is that across the board they seem to be able to perform a “change of direction” cast—the “single spey” for example—very effectively. In my opinion, this is somewhat of a litmus test for good spey rod design, proof that the strong tip and progressive action are doing their job. Last summer I had the opportunity to ask John Hazel his opinion on a number of spey rods from various rod companies. Concerning one leading rod manufacturer, Hazel remarked that they made two models he liked, “nothing special about the others.” When I asked him about C.F. Burkheimer, he said, “All the Burkheimers are good.”

As for the new 3M nano resin that has been getting lots of attention lately, Kerry has already incorporated it into many of his rods. He is generally positive about the new material, but is quick to remind people that it’s not the “end all,” and will never serve as a shortcut for good taper design.

Currently, Bighorn Trout Shop is stocking Burkheimer rods in the most popular trout sizes, and we can order whatever you want. You really need to see these rods to truly appreciate the craftsmanship, and better yet, if you’re in Fort Smith, take one out on the river.

By the way, my new dream setup is the Burkheimer 489-4 DAL, and a Hatch 4-Plus reel with WF-5 Sharkskin Trout Taper. The rod nearly casts itself. Russ Peak would be proud.