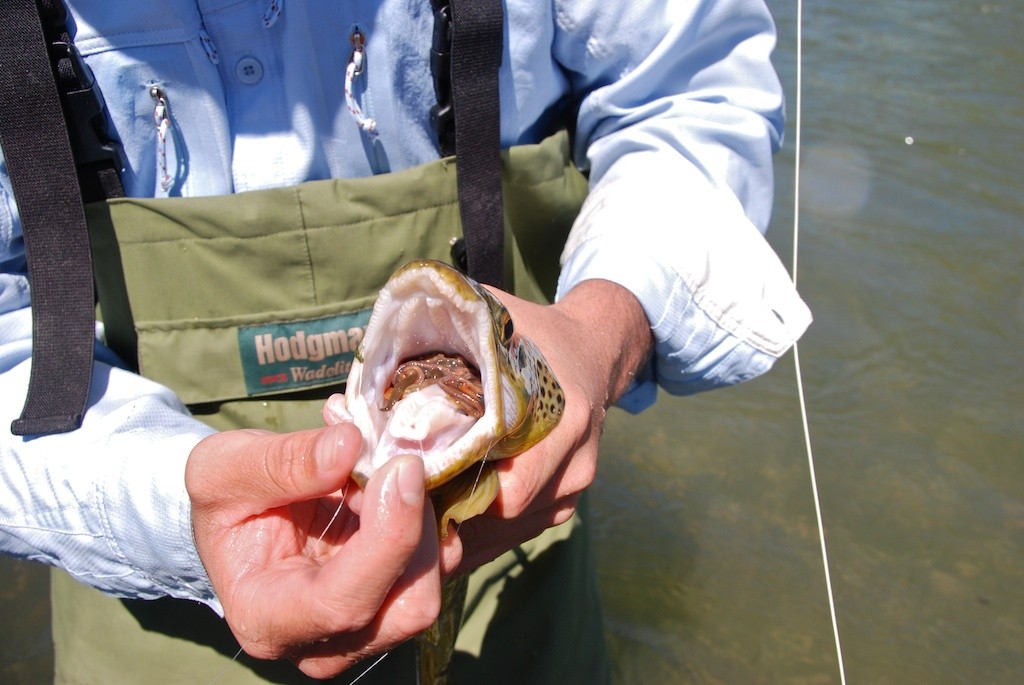 “A man may fish with the worm that hath eat of a king, and cat of the fish that hath fed of that worm.”
William Shakespeare
Hamlet

Instead of a Mother’s Day Caddis or Salmon Fly hatch, we’re experiencing the spring “Worm Drift” here on the Bighorn. The high water flows are dislodging a large number of aquatic worms, and the fish are taking advantage of it. Notice the brown trout in the picture. Yesterday, a number of fish were taken that had worms literally coming out of their mouths; yet, these greedy fish couldn’t resist eating one more.

Needless to say, fishing on S.J. Worm patterns has been very good. Various colors are working—brown and burgundy being especially good. Or you can fish the two-tone, brown and burgundy. Someone once told me that “Trout don’t refuse a fly because it’s the wrong color; they refuse it because they don’t see the RIGHT color”—hence, the theory behind the two-tone worm. Natural aquatic worms can exhibit quite a color range along the length of their bodies. Part of the critter is light brown, then darker brown, and then burgundy brown. When he’s rolling and twisting in the current, he can flash several different color shades to the fish. Different light conditions may also influence what is effective. So tie up some S.J. Worms in different styles and shades, and hang on.